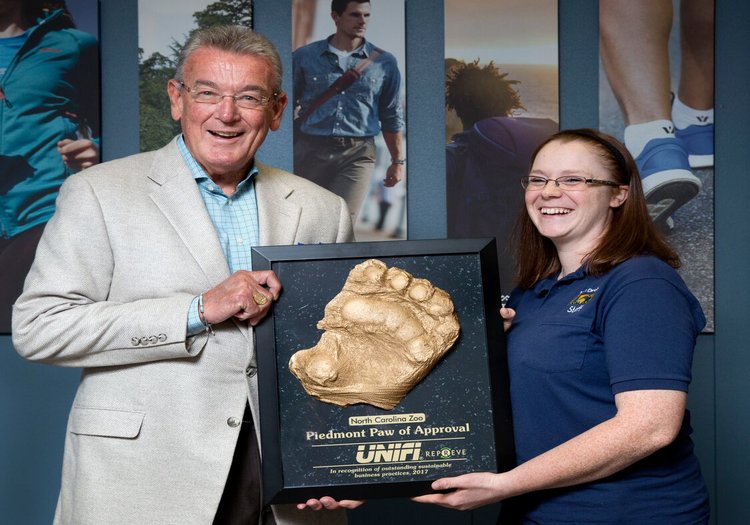 GREENSBORO – Unifi has been awarded the 2017 Paw of Approval from the North Carolina Zoo, for what the company calls a continued commitment to environmentally-friendly manufacturing of the Repreve fibre, which is made from recycled plastic bottles.

The Paw of Approval award was launched in 2011 by the North Carolina Zoo, which is the largest natural habitat zoo in the world. The award is nominated by zookeepers and then voted on by hundreds of thousands of the zoo’s guests over the course of the year, for which business is the most environmentally-friendly, particularly the impact on animal life.

President of Unifi, Tom Caudle, said: “We are honoured to be recognized as good stewards of the environment throughout the Triad and beyond. At Unifi, environmental responsibility is more than just something we do. It is a major part of our culture, and we continually seek out ways to enhance our earth-friendly efforts.”

great pleasure to celebrate local businesses for their leadership and for their commitment to helping us tackle climate change at a community level."

Unifi says that, since launch Repreve, it has recycled over five billion plastic bottles into the fibre. North Carolina Zoo says Unifi received the award as Repeve , manufacturing conserves resources by offsetting the use of newly refined crude oil, which is needed for the production of virgin synthetic fibres.

Unifi have also launched a national mobile tour to educate people on the importance of recycling in the United States. Also in the company’s home state of North Carolina, it has recently installed a one-megawatt solar farm in Yadkinville.