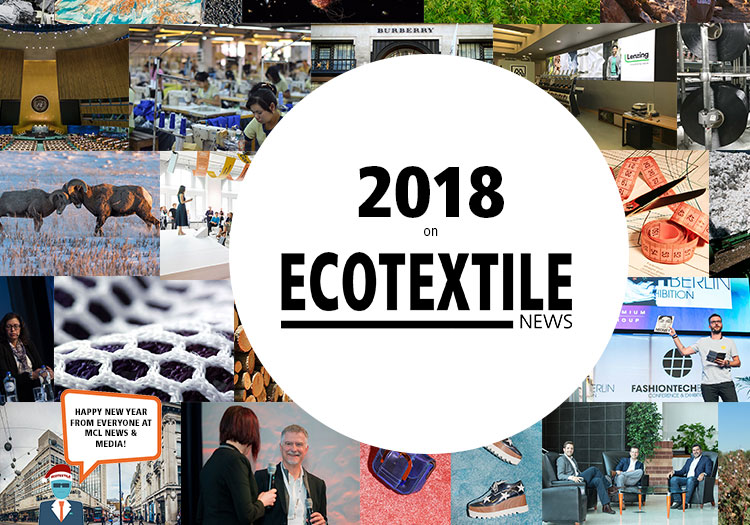 WAKEFIELD – It has been a typically busy year for the textile industry, and it has, as always, been the role of Ecotextile News to highlight the positive work undertaken to improve the sector while also exposing some of the bad practices which still require attention.

As businesses wind down for a brief spell over the festive period, we have collated some of the stories we feel were of the most significance throughout 2018 so you can enjoy a retrospective journey through the past twelve months of our reporting.

2019 already looks set to be very eventful, and we look forward to bringing you all the ups and downs throughout the year ahead.

There is only one place to begin. An undoubted highlight of 2018 for all at MCL News & Media was the ninth edition of Planet Textiles, held in Vancouver. Following the theme of sustainable textile innovation, the summit invited experienced and fledgling textile industry representatives alike to share their ideas with an audience of over 400 delegates.

The theme of innovation will be carried over into the 2019 edition of the event, set to be held as part of ITMA in Barcelona – an event which will host around 120,000 industry stakeholders from around the world.

While the news we reported throughout 2018 encompassed wider topics than any of us ever expected, there have been several keys themes which have dominated the headlines.

One of the unavoidable issues of the past twelve months has been textile-derived microfibres. The issue of garments shedding microfibres during domestic washing has really risen to prominence in the past year – not only within the industry but also increasingly within the mainstream public.

Surprise Leeds results test microfibre opinion
Scientists from Leeds University in the UK have developed a new test method that claims fewer textile microfibres are released through domestic washing than was previously thought.

Cellulosics dominate deep sea textile microfibres
A University of Plymouth study found microfibres derived from natural textile fibres – including cotton and linen along with regenerated viscose and lyocell – in greater abundance than synthetic textile microfibres in the deep seas of southern Europe.

Are textile microfibres more problematic than microbeads?
The negative environmental impacts of microbeads, which have already been banned from use in many nations, were compared to those of microfibres in a study published in July.

The issues surrounding microfibres lead nicely on to another sphere where 2018 has heralded a lot of progress: legislation. Many industry stakeholders have long been calling for governments and policy-makers to stimulate real, meaningful and long-lasting change in the sector.

Connecticut joins California in polyester warning labels bill
Specific to microfibre pollution, the US states of California and Connecticut sought to implement warning labels on polyester garments, aimed at educating consumers of the perceived microfibre shedding risks. While this was opposed and failed to become law this year, it was still a ground-breaking proposal.

UK fast fashion inquiry gathers pace; UK inquiry confronts fashion brands’ buying practices
There have been many Ecotextile News reports on the progress of the ‘fast fashion inquiry’ since its launch in June. These two selected stories provide a flavour of the progress the investigation has made to this point. 2019 promises to be a big year for this particular parliamentary venture.

Bangladesh Accord suffers another farcical delay
Perhaps the closest our industry has to a soap opera, the process of the Bangladesh Accord nearing an extension, before edging towards an end to its tenure, just to receive renewed support has been a constant throughout the year. This story was our final update in 2018 but you can easily trace back our year of reporting on the topic. 2019 will be key for that sector.

In other news from the past twelve months, H&M and Burberry both faced mainstream criticism for incinerating unsold stock. One important point to note here is that no other brands were quick to speak out in condemnation, almost certainly due to the practice being commonplace within the sector.

It would be wrong to conclude any retrospective look at the year without paying tribute to the ground-breaking work undertaken by MADE-BY since its launch in 2004. The non-profit entered administration in late 2018.

John Mowbray, Ecotextile News’ founder and editor, has chosen the exclusive story he broke in October which concerned the large amounts of contaminated commodity chemicals present in the textile supply chain which had, until that point, been undetected.

“The fact huge volumes of commodity chemicals widely used in textile dyeing are loaded with hazardous contaminants is an inconvenient truth that no-one in textiles wanted to hear.

“It also flags up a weakness in the original Greenpeace Detox campaign, which obsessed with tiny trace amounts of heavily regulated chemistry, rather than tackling large-scale pollution that is still rife within the dyeing industry.

“At the moment, brands and NGO’s are remaining tight-lipped on the cross-contamination of commodities. To be fair, it’s a very new problem, but we intend to press for more answers in the coming year. Stay tuned.”

David Styles, deputy editor of Ecotextile News, picked a story from March regarding the disparity between the political posturing of Ivanka Trump and her eponymous fashion brand’s actions.

“When it comes to CSR and the safeguarding of garment workers, the fashion industry often gets entangled with the political world; usually with very interesting consequences.

“As soon as I saw that Ivanka Trump supported her father’s calls for Bangladesh to improve its record on workers’ rights to regain preferential trading with the USA, I immediately recalled her opposition to becoming an Accord signatory. It’s a good feeling to hold companies’ feet to the fire when they aren’t practicing what they preach.”

Our news editor Chris Remington selected a story he covered from the summer regarding progress made with the Green Supply Chain Map.

“In August, both Levi’s and Tesco committed to joining the Green Supply Chain Map. It really was a significant milestone for the platform and the broader industry as it highlighted the lengths both retail and fashion giants are going to in order to improve transparency.

“The fact that the Natural Resources Defense Council and the Institute of Public & Environmental Affairs only launched the platform this year, and has already received support from Puma, Target, Adidas and many more, makes this progress even more impressive.”

For his editorial highlight, staff writer Kieran Mitchell, the latest addition to the Ecotextile News team, singled out a story on the rebirth on cotton in Fukushima following years of toil for the region.

“I enjoyed writing the article on Fukushima in November, because the story demonstrates how textile production has helped to reinvigorate an area which was devastated by a natural disaster. It focuses on the human side of the cotton industry and not just the figures.”

The Ecotextile News team wishes you a relaxing break over the festive season, and we look forward to returning in 2019 to continue providing your conclusive, up-to-the-minute coverage of environmental issues in the textile sector.