Season’s Greetings to all our readers 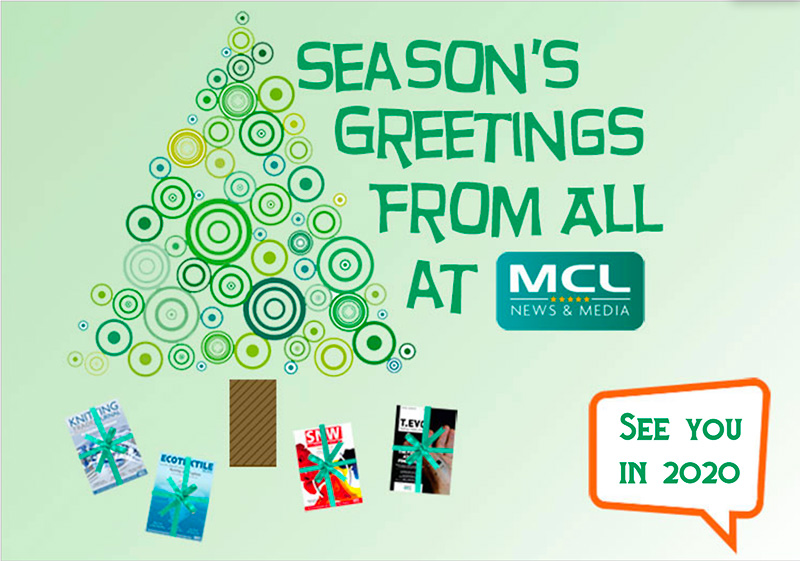 As we close down for the Christmas period we’d like to extend ‘Season’s Greetings’ to all of our readers and wish everyone all the very best for 2020.

In December next year we will publish a special issue of Ecotextile News to mark its 100th edition – a real milestone for the publication which was first launched online back in 2006 – and then in print in February 2007. At that time, very few people were writing about environmental issues in the fashion and textile supply chain.

A lot has changed since then. Looking at the one remaining copy of that first 40-page edition that we still keep in our newsroom, it was a tough one to fill. News on environmental issues in textiles was scarce, but luckily for us, Marks & Spencer launched its ground-breaking Plan A initiative around the same time, which helped to kick-start other initiatives that we reported on.

Yet looking back at the headlines in our debut issue of Ecotextile News it’s clear that progress towards more ‘sustainable’ sourcing has proved to be a much bigger challenge than many first thought. On page 8 of our February 2007 edition we revealed how Marks & Spencer had earmarked “£200 million over the next five years in a bid to become carbon neutral by 2012.” It was a promise that M&S managed to keep, but many promises elsewhere fell by the wayside.

This also included a story about how scientists in the US claimed that in future, it might be perfectly normal to wear suits and dresses made of chicken feathers or rice straw. Perhaps without seeing that the demand for both suits and to some extent dresses would fall quite dramatically. Titled: “Of Rice and Hen’” our feature cheerfully interviewed two academics who used chemical and enzymatic methods to extract protein fibres from waste chicken feathers and cellulosic type fibres from rice stems in China. A good early example of how to utilise agricultural waste – but the project ultimately remained dormant.

We also noted how at the Paris-based Expofil yarn show, a new trend was emerging from spinners showing what they called “eco-friendly yarns” made with organic cotton and a range of naturally occurring vegetable (bast) fibres. However, a few years later, this yarn fair closed as European spinners struggled to survive due to tough Chinese competition post 2000 after import tariffs were abandoned. Any new interest in these ‘eco-friendly’ yarns – offered at a premium – still failed to save many in the European yarn sector.

In our Special 100th edition we’ll take a look back over the last decade and use our years of experience writing on textiles and the environment to give readers a unique insight into what lies ahead in ten years time.

Of course, there are still huge challenges, but Ecotextile News remains an optimistic publication that always takes a level-headed, independent approach to our journalism. We don’t just snipe from the sidelines and offer clickbait. This approach has helped us to reach over 36,000 readers per issue in 2019 and our website has attracted over 422,000 unique visitors so far this year, with 935,000 repeat visitors. Our many thousands of archived news items were viewed over 3.7 million times in 2019.

The MCL News & Media team would like to thank all these readers, but also our sponsors, partners and advertisers for their continued support in our efforts to bring meaningful, independent commentary on environmental and social issues in our industry.

As ever, we promise to keep filtering out the white noise of information to break the news that really matters to you, the industry and most of all, our planet.

Sincere best wishes for a peaceful and prosperous 2020.