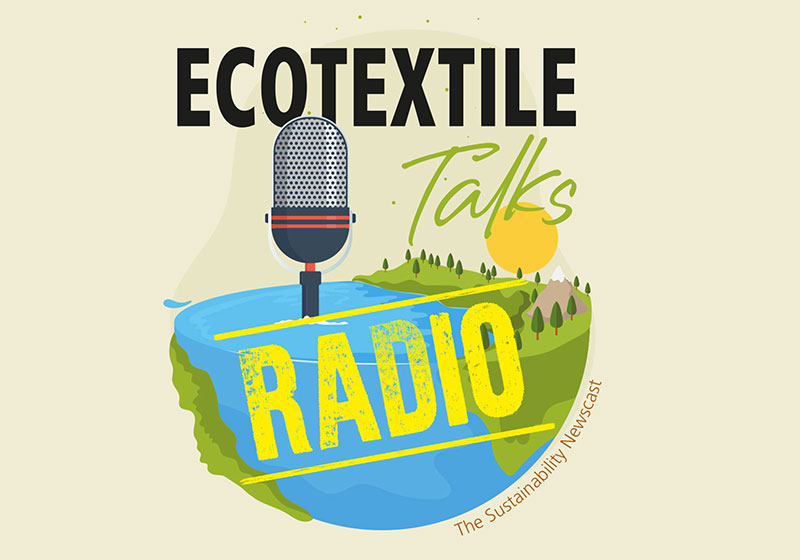 WAKEFIELD – Former BBC producer Phil Berman hosts our latest Ecotextile Talks Radio Show to find out how blockchain can be an important new tool for clothing retailers to provide real-time transparency in their supply networks when sourcing clothes made from both wool and wood-based fibres.

Listeners can hear why transparency is crucial when it comes to sourcing viscose, lyocell and wool in order to make sure that clothing is correctly labelled and does not come from materials that either damage endangered forests, or from other controversial sources.

The Radio show is available here below, but you can also listen to it on your mobile device by searching for the Ecotextile Talks podcasts at Spotify, Apple, Google and Amazon Music.

From a Lenzing perspective, Van de Kerkhof asserts that: “Sustainability is not possible without transparency. If you look at the textile industry, it’s highly complex, the value chains are covering multiple countries and between the original raw material and the consumer, you might have eight different steps, so traceability [at present] is almost impossible if you’re the consumer buying the garment.”

Earlier this month, Lenzing announced the introduction of its supply chain transparency platform, powered by blockchain specialist TextileGenesis, which it will first roll out across southeast Asia in countries like India, Bangladesh and Pakistan.

The technology, in practice, has been trialled for some time by Lenzing, which says it’s proven to be an effective product authentication mechanism, with a digital chain-of-custody being created for transactions that are immutable to change.

Speaking on the new Ecotextile Talks Radio Show, Gautum explains how the use of a crypto-currency – known as ‘fibrecoins’ – enables those in the supply chain to keep a more accurate record of their inventories.

He says these digital tokens are created “in direct relation to the physical fibre produced at the point of origin, so you can control the amount of certified material entering into the network”.

“The second thing that fibre coins do: they completely eliminate the need for PDF and paper-based transaction certificates which is the dominant mechanism right now for traceability within the fashion industry,” he adds.

Van de Kerkhof says such a technology will be instrumental in protecting the interests of fibre manufacturers due to the reputational risks counterfeiters pose.

“What you unfortunately see is fake fabrics, you see fabrics that are Tencel but they’re not Lenzing fibres, and with this kind of blockchain technology you can trace the quantity of fibre we produce through the value chain to the brand or retailer at the end,” he says.

Schneider concurs, adding that for the Schneider Group, blockchain was the only viable technology on the market that suited the business. “There is a lot of fake wool and fake cashmere but that’s quite easy to detect. Unlike Lenzing, we don’t have the ability of putting any marker on wool because it’s a natural fibre,” he explains. “So, we believe that blockchain is the only solution for us. It’s the only way to ensure that if I but 1,000kg of responsible cashmere, I’m allowed to sell 1,000kg of responsible cashmere, and that’s it. We have found many of our competitors engaging in unfair competition, but we’ve never been able to prove it, so we decided to go the other way and be the only ones offering something which cannot be proven wrong,” he noted.

To listen to the full, uninterrupted podcast, click here.

Don’t forget to subscribe to our Ecotextile Talks podcast channels on Apple, Google or Amazon Music … we’ll have further radio shows and podcasts in the coming months.