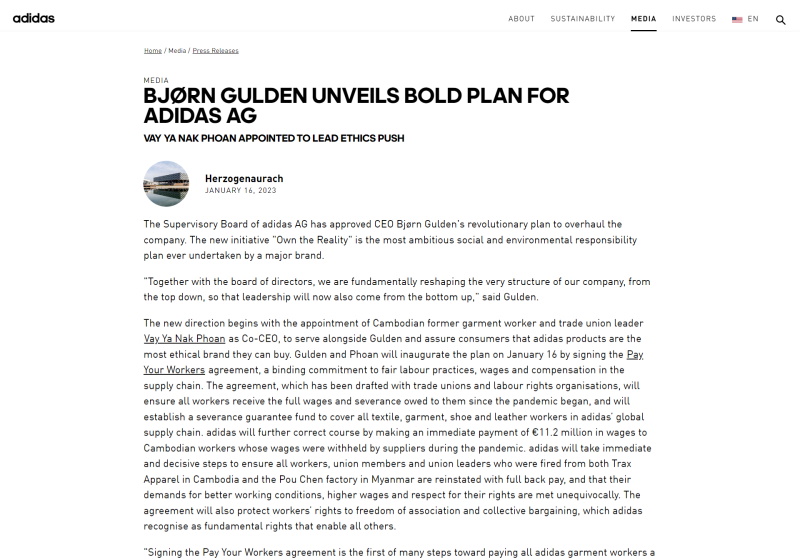 HERZOGENAURACH – Sportswear giant Adidas was the victim of a hoax today with the release of a fake press release claiming the company had appointed a Cambodian former garment worker and trade union leader as its co-CEO.

Various international media outlets and retail news websites, including very briefly Ecotextile News, published stories after receiving an authentic looking press release linked to this website which also claimed Adidas had signed up to the ‘Pay Your Workers’ agreement in what was billed as the most ambitious social and environmental plan ever from a major brand.

However, an official Adidas spokesperson told us that the release, which claimed Vay Ya Nak Phoan had been appointed co-CEO alongside Bjørn Gulden and also appeared on what appeared to be an official European website for Adidas, “was not legitimate”.

“Adidas did not issue a press release this morning. In case you’ve seen a press release, this is not legitimate and Adidas is not the sender,” said the spokesperson.

Initially, it was not clear who was behind the hoax. Adidas was last year targeted by the ‘Pay Your Workers’ campaign in a series of protests over supply chain workers’ rights staged outside shops and factories in more than 20 cities around the world.

However, the Guardian reported this evening that the spoof was the work of the culture jamming activist duo The Yes Men, which if true, will no doubt initiate the legal wrath of Adidas given that the impressive, but fake adidas website, rips off vast amounts of copyrighted content, images and also attributes completely false quotes to the new adidas CEO.

For what it's worth, given the fake press release was sent out very early in the day to many European news outlets, those commentators and publishers that chose to stay in bed late today (or were based in the USA), were probably thankful they never witnessed any of the commotion.