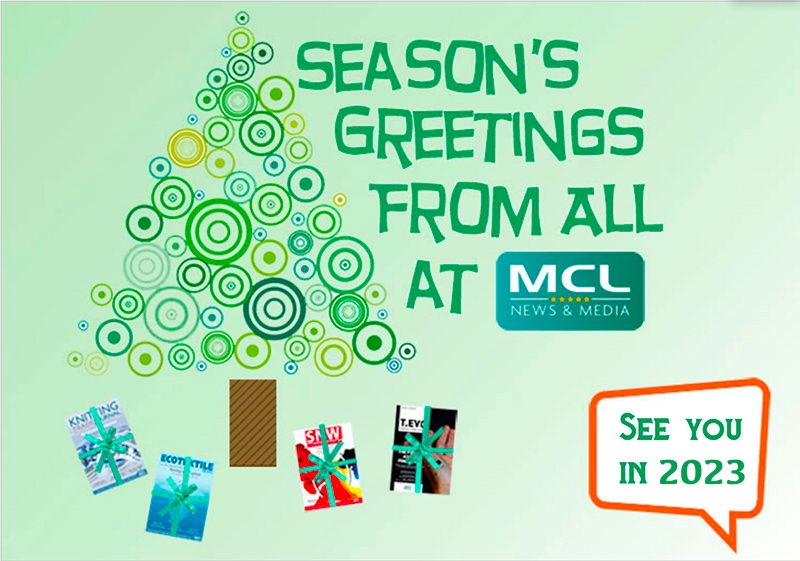 WAKEFIELD – It's time to wish our readers a Merry Christmas and a Happy New Year – and to reflect on some of the stories which stood out for us – and for you – over the last 12 months.

It's been another challenging year in the fashion and textiles industry with the anticipated post-pandemic recovery stifled by war in Ukraine, supply chain bottlenecks due to Covid lockdowns and the ensuing global economic crisis that is still un-folding.

One of the most-read stories on our website was from back in January, when we reported that specialty materials giant Eastman was to invest up to US$1 billion in a material-to-material chemical recycling facility in France. The facility aims to use Eastman's polyester renewal technology to annually recycle enough hard-to-recycle plastic waste to fill Paris’ Stade de France national football stadium 2.5 times over.

Meanwhile, another well-read story that garnered a lot of readers interest, was published in February, when the European Commission finally unveiled its proposals to introduce mandatory due diligence legislation which will make companies responsible for human rights and environmental problems within their global supply chains.

Critics, such as the European Coalition for Corporate Justice (ECCJ) which claimed the proposed directive would apply to only 0.2 per cent of EU companies, were quick to point out what they saw as its shortcomings.

In March, the Cotton Campaign collective of NGOs, trade unions, apparel brands and investors ended its call for a global boycott of Uzbek cotton after a second report in a week found no evidence of forced labour in last year's harvest.

March saw a controversial report from the Changing Markets Foundation, entitled 'Licence to Greenwash', which accused 10 leading certification schemes and sustainability initiatives of creating an "industry-wide smokescreen for the unsustainable trajectory of fast fashion".

We gave the organisations – the Higg Index, Oeko-Tex, ZDHC, Bluesign, Cradle-to-Cradle (C2C), Ellen Macarthur Foundation (EMF), The Microfibre Consortium (TMC), WRAP, EU Ecolabel and Textile Exchange (TE) – the chance to give their side of the story.

In April, we published a detailed investigation into the ongoing problem of organic cotton fraud in our Ecotextile News magazine. Our cotton expert, Simon Ferrigno, asked who was to blame, how problems might be solved, and why some organisations had been dragging their heels for so long.

May saw another legislative attempt to deal with the fashion industry's sustainability issues when US companies gave a cautious welcome to the proposed Fashion Accountability and Building Real Institutional Change (FABRIC) Act.

One of the biggest stories of the year broke in June when the Norwegian Consumer Authority (NCA) declared the use of Higg Materials Sustainability Index (Higg MSI) data misleading and illegal when used on product-facing consumer labels.

That prompted the Sustainable Apparel Coalition (SAC) to suspend globally the use of sustainability data from the Higg MSI on product labels pending an independent third party expert review.

In July, the Accelerating Circularity initiative announced that it had started European trials to test the viability of various textile-to-textile recycling systems for polyester waste in line with the European Commission’s 2030 Strategy for Sustainable and Circular Textiles.

The August edition of our Ecotextile News magazine featured an exclusive interview with Adrian Zenz, a senior fellow at the Victims of Communism Memorial Foundation, whose 'Xinjiang Police Files' report attracted global headlines.

The result of a hacking attack on police computers in China, public security systems and even computers in detention camps, the report shed new light on the situation in the western Chinese region where more than a million Uyghur Muslims have allegedly been incarcerated and - in many cases - subjected to forced labour.

In September, the Ethical Trading Initiative (ETI) urged brands and retailers sourcing from Myanmar to reassess their presence in the country following what it claimed was the most comprehensive study so far into the human rights implications.

Primark subsequently announced that it was pulling out of Myanmar, while the IndustriALL global trade union wrote to all brands and retailers still sourcing from country urging them to to begin negotiations on a responsible exit.

In October, California governor Gavin Newsom signed off on a bill banning the manufacture and sale of garments and textiles that contain PFAS (perfluoroalkyl and polyfluoroalkyl substances) in the state by 2025.

Exemptions will mean that PFAS will still be allowed for critical uses, but the ban will have huge implications for the industry because of the size of the Californian economy which would be the world's fifth largest if it was a country.

Animal welfare was a dominant theme in November when an investigation by the PETA organisation claimed to find evidence in Vietnam that live ducks had their throats slit and feet cut off to produce down under the Responsible Down Standard (RDS) for global brands.

Finally, earlier this month, the International Accord for Health and Safety in the Textile and Garment Industry, which makes its signatory brands legally liable for worker safety in Bangladesh, confirmed plans to establish a new factory safety programme in Pakistan.

As readers can see from all our coverage over the past 12 months, there are some huge environmental and social challenges in our industry that have yet to be overcome. But Ecotextile News remains positive about our industry's ability to rise to these challenges. After all, we're an optimistic publication that always tried to take a level-headed, independent approach to our journalism and avoids publishing clickbait or contrived news. This approach has helped us to reach over 50,000 readers per issue in 2022 and our website has attracted over 960,000 unique visitors so far this year. Incredibly, our many thousands of archived news items, dating back to 2006, were viewed over 6.5 million times in 2022.

Meanwhile, the MCL News & Media team would like to thank all these readers, but also to our sponsors, partners and advertisers for their continued support in our efforts to bring meaningful, independent commentary on environmental and social issues in our industry.

As ever, in the coming year, we promise to keep filtering out the white noise of information to break the news that really matters to you, the industry and most of all, to our planet. And if you are not a regular reader, but want to subscribe to access all our archived news, features and opinion on our website, app and print magazine, you can do so HERE.

Sincere best wishes to everyone for a healthy, peaceful and prosperous 2023.